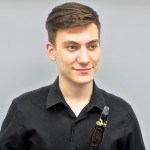 Dylan has participated in the 2013 All-Eastern Band Festival, Hartford, CT, the Kimmel Center Chamber Music Camp, and the Northern Lights Music Festival, Aurora, MN, where he was featured as a soloist with the festival’s orchestra. He was recently selected to participate in the 2015 Kennedy Center/National Symphony Orchestra National Trustees Summer Music Institute in Washington, D.C.

Born in Butler, PA, Dylan began his clarinet studies at the age of 10 with Candy Maxwell. He is a former member of the Philadelphia Sinfonia and a past student of Settlement Music School, where he studied woodwind chamber music on scholarship with Shirley Curtiss. He has appeared as a featured soloist and as a member of the clarinet section with the Philharmonic of Southern New Jersey, under Maestro Matthew Oberstein. He is a graduate of Clearview Regional High School in Mullica Hill, NJ.