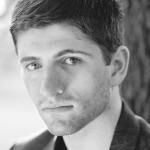 Alan Schlichting is a junior at Westminster Choir College of Rider University, where he is a music composition major and an Arts Administration minor.

Growing up in Virginia, Schlichting studied clarinet, piano, organ and voice, and participated in numerous youth musical theater programs. He has performed as a singer, pianist, and organist for several churches, and was a featured musician in ArtsFusion 2013, a fundraiser to support mental health charities. Youth honors include first place in both classical and musical theater categories of regional NATS, second place in voice in the Asian American Music Society competition, first place on clarinet in the Woodbridge Music Club scholarship contest, and a finalist in the regional Schmidt Youth Vocal Competition.

An active performer, Schlichting sang in the chorus in the McCarter Theater’s premiere of Der Bourgeois Bigwig, and has premiered roles in student-written musicals. He is an active piano accompanist for choirs and soloists at Westminster. Original compositions include choral hymn arrangements, arrangements for collegiate a cappella groups, instrumental chamber pieces, and musical theater works.

He is a Baccalaureate Honors Program student and Presidential Scholar, and was honored by Rider University as an Andrew J. Rider Scholar in 2013. Beyond Westminster, Schlichting aspires to become a composer and music director for musical theater.